Duong Quoc Dinh, 47, has 30 international awards under his belt and is known around the world for his efforts to capture the beauty of the bare female form.
Despite his success, Dinh hasn’t submitted any work to an international photo contest for three years and has decided to return to his first passion, painting.
“Photography created my international reputation,” Dinh said. “But painting is my life.”

Dinh says his mania for drawing began at 10. He recalls drawing with and on whatever he could get his hands on.
Dinh’s 5th grade teacher, Ms. Van, encouraged him to pursue the passion.
Despite post-war difficulties in the late 70s and early 80s, the little student travelled more than five kilometers from his home to the school on what were then the rural outskirts of Ho Chi Minh City.
At 18, Dinh entered the Dong Nai College of Decorative Arts — a vocational school the French established in 1903 — with dreams of studying at Gia Dinh, the southern region’s most prestigious fine arts academy.
His family’s poverty made those aspirations mere pipe dreams. Instead, he walked to class in Dong Nai, every day, and graduated in 1989 at the top of his class.
Three years later, at the age of 25, Dinh married a local girl named Quach Thi Mong Ha.
To support his young family, he took any job he could get and drafted designs for ao dai (traditional Vietnamese dress), ads and company logos.
However, he was not able to provide a comfortable life for his wife and two children. “My life remained difficult until late 2000,” Dinh recalled.

One day, Dinh met a photographer at a park in Dong Nai and realized he could earn a decent living snapping photos of families relaxing outdoors.
Dinh’s elder sister, who had emigrated to Germany, sent him a Fuji digital camera to help get him started.
“It was such a precious gift for me then,” Dinh said. “A month later, I started to take photographs, mainly portraits, and bound them into albums.”
Dinh quickly taught himself the basics of how to use a camera and Photoshop. Soon, he’d become famous for producing pictures that looked more painted than shot.
Seeing an opportunity, he borrowed money from his sister and opened a studio where he cranked out high-quality pictures for VND30,000 a piece — twice the going rate in the province at the time.
After six months, his business and clientele mushroomed. Dinh recalls not having time for lunch or dinner.
Some nights, he slept in his studio just to fill his clients’ orders on time. 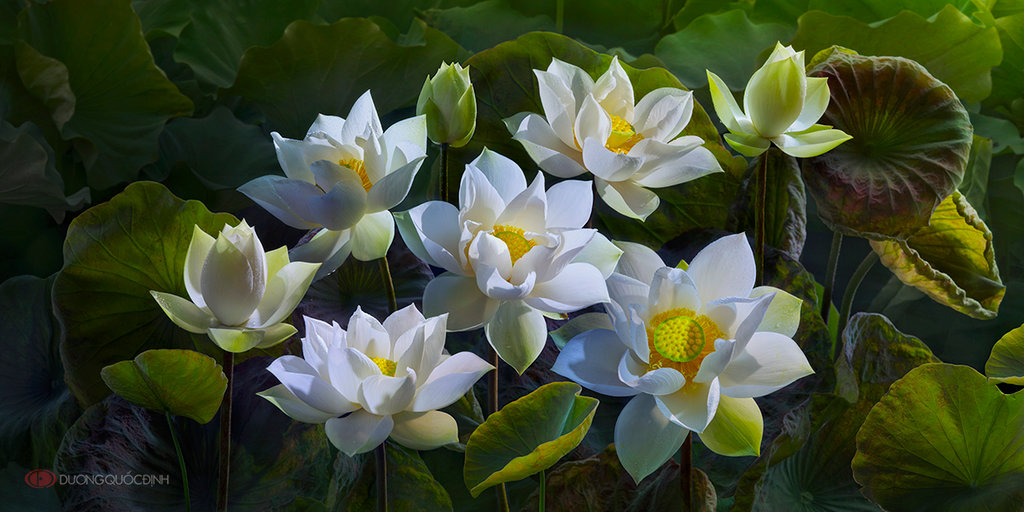 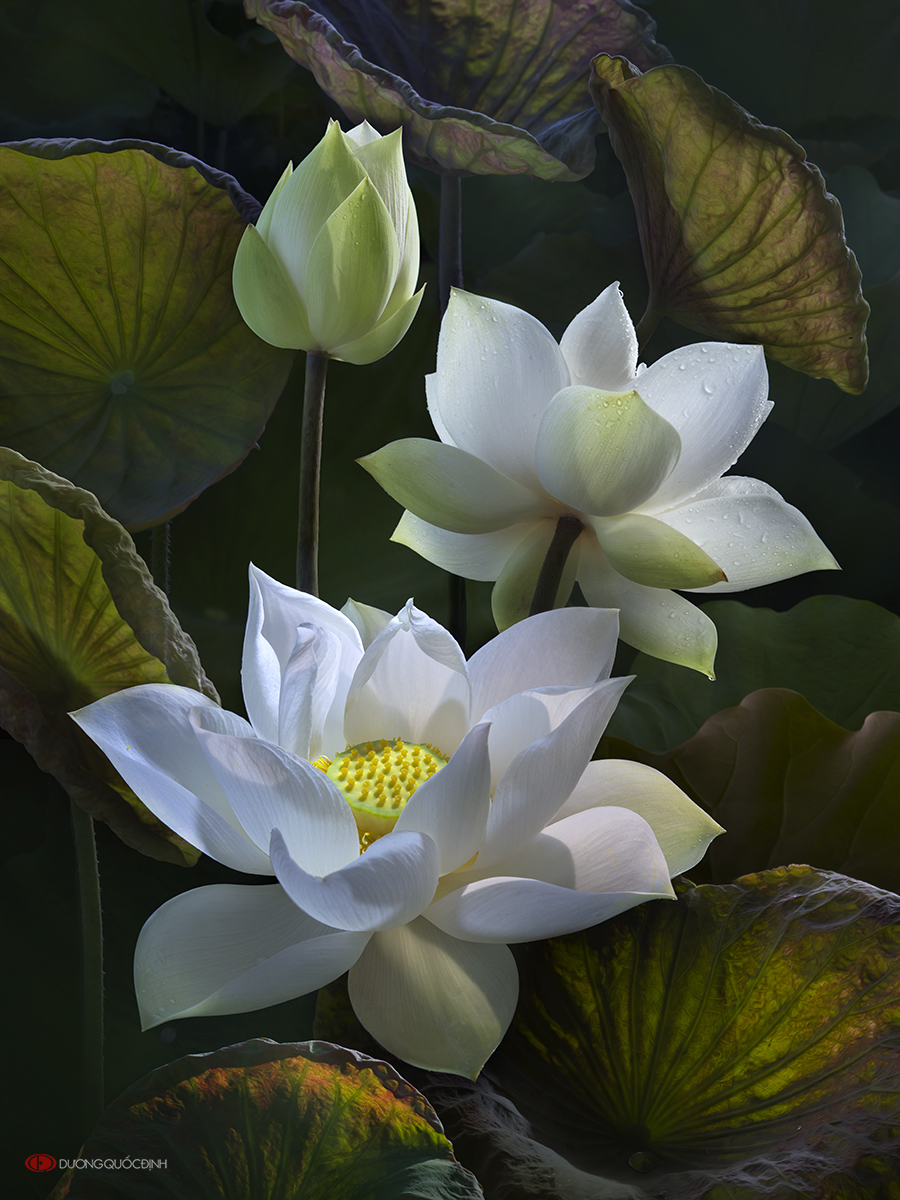 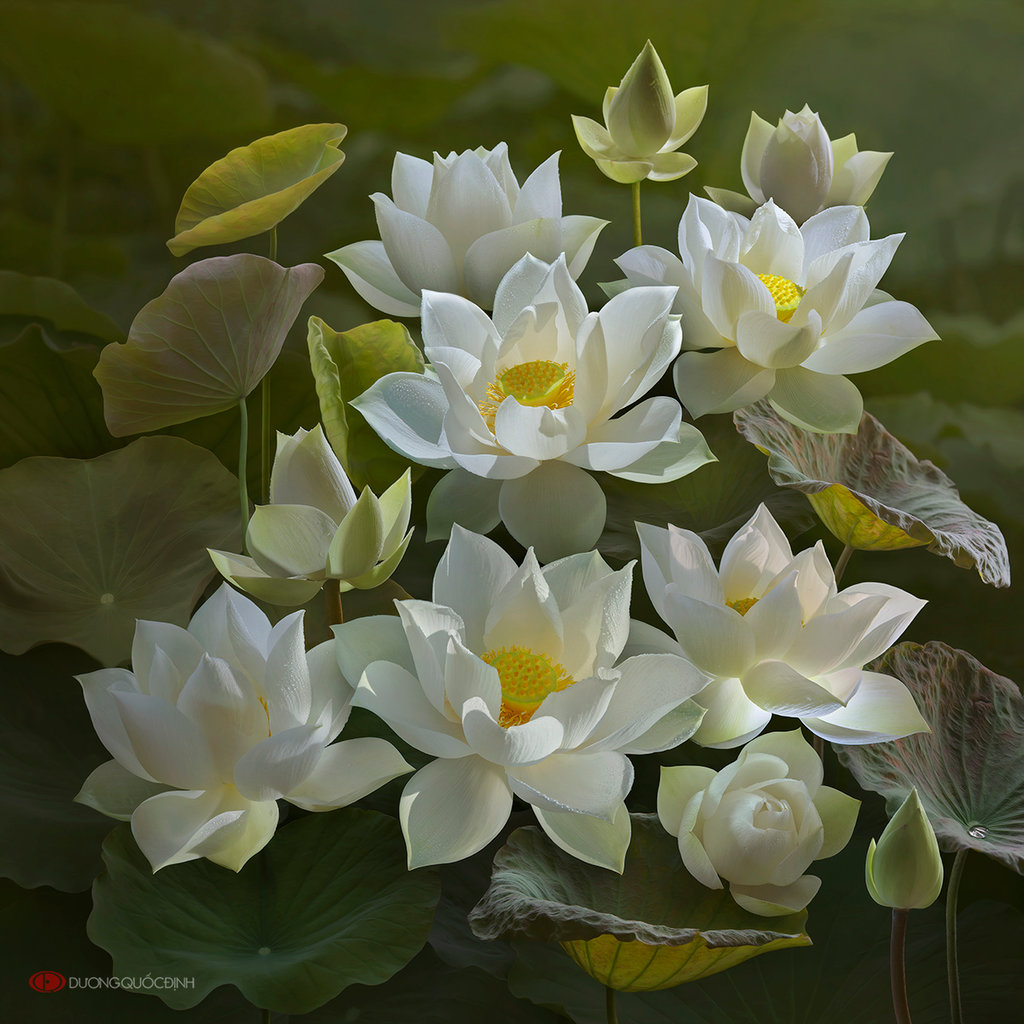 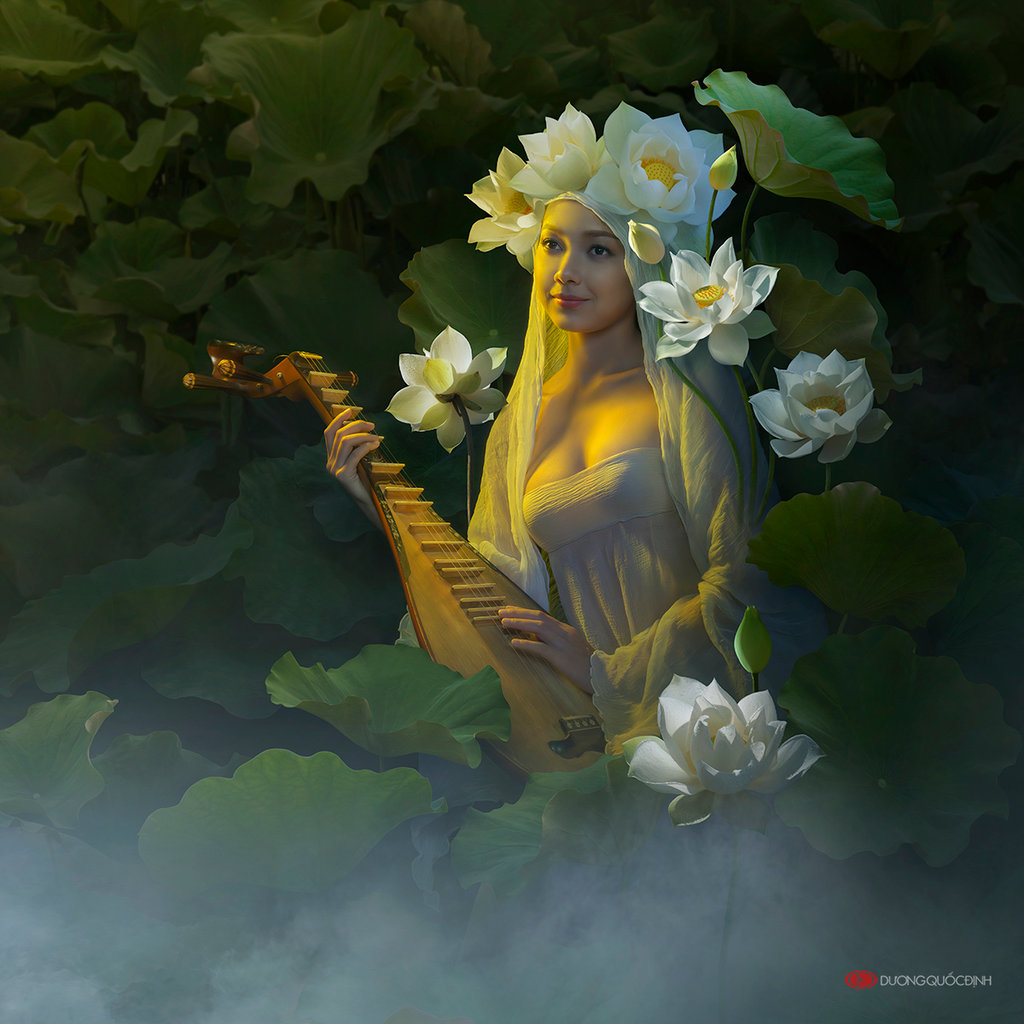 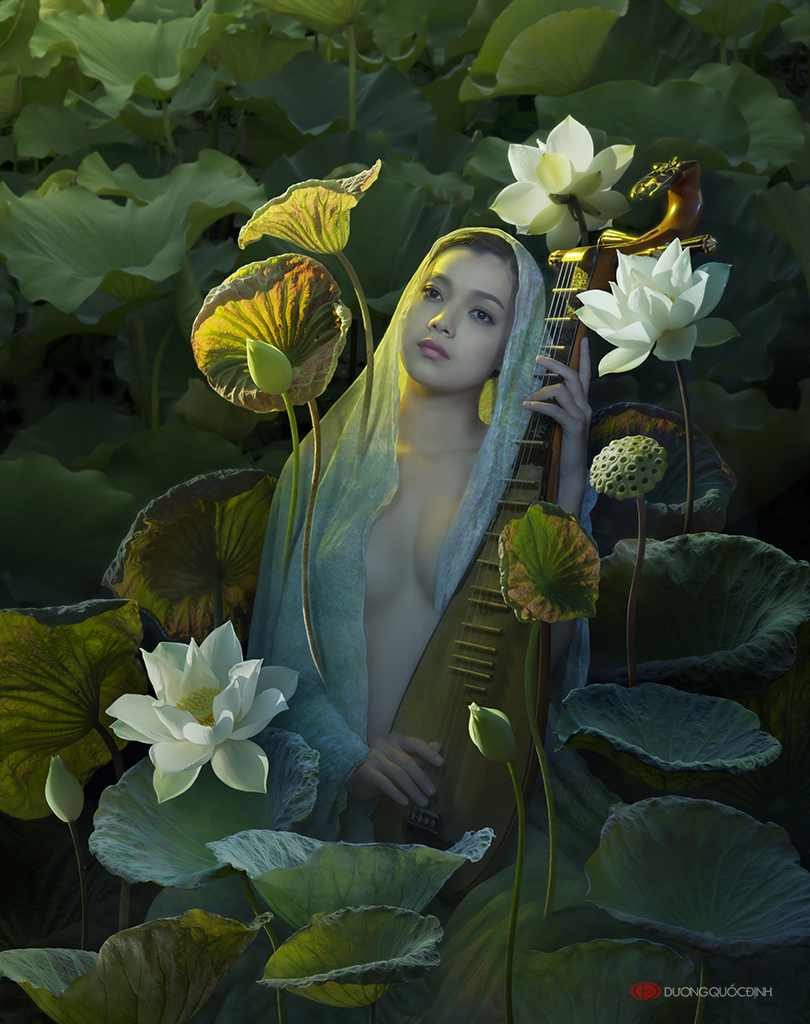 Thriving in his new business, Dinh came to feel his commercial success had rendered the years he spent in art school meaningless.
Finally, he decided to close his camera shop.
His decision came as a great shock to his relatives and friends.
“Are you mad?” his wife asked.
“No, I’m not,” Dinh replied. “I could earn a lot of money running the studio, but I don’t feel like myself anymore.”
“Could you give me three more years?” he recalled asking his wife.
Dinh promised her that, if he failed, she could leave and take the children.
An internet search for “nude art” led Dinh into a new world.
He found that contemporary Vietnamese artists were creating work that harkened back to the explorations of the female form that characterized art in Europe and America decades ago.
Dinh decided the female body would be his canvas.
His first work, “Life Material” depicted a young bare chested woman with her hands poised over her head.
The photograph won high awards at five international photo contests.
Between 2005 and 2008, Dinh collected 30 medals, including 20 golds, and many trophies at photo contests held in India, Japan, Hong Kong, South Korea, Macau, Argentina, Spain, and Italy. 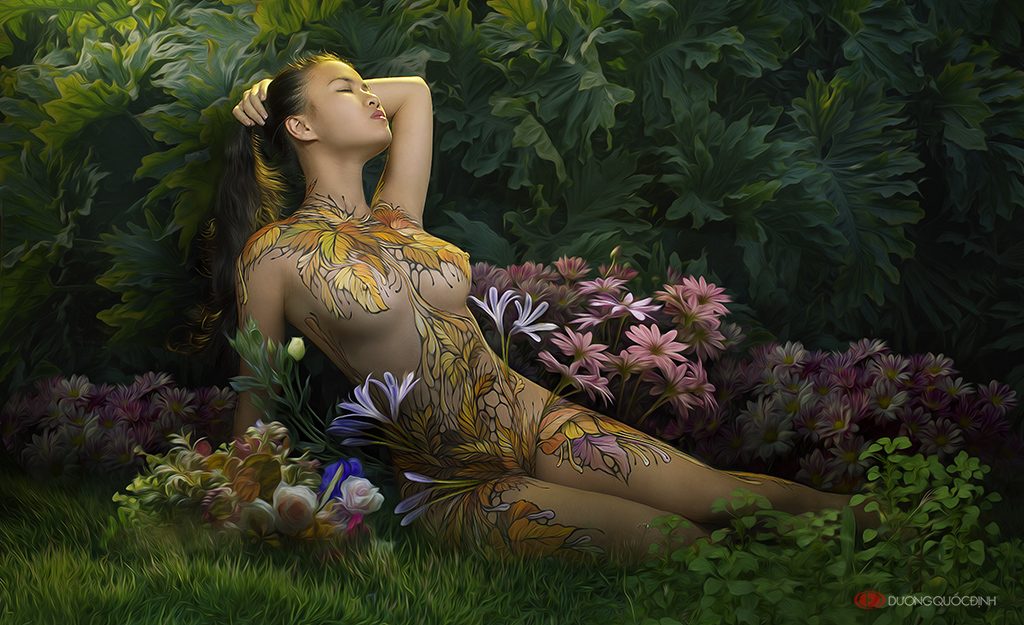 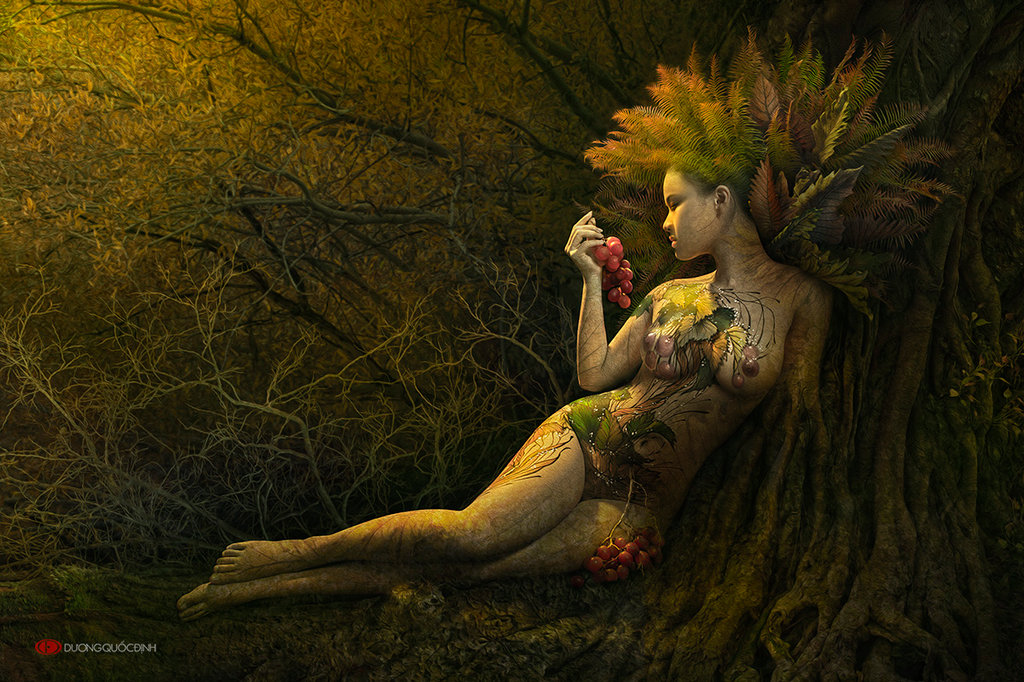 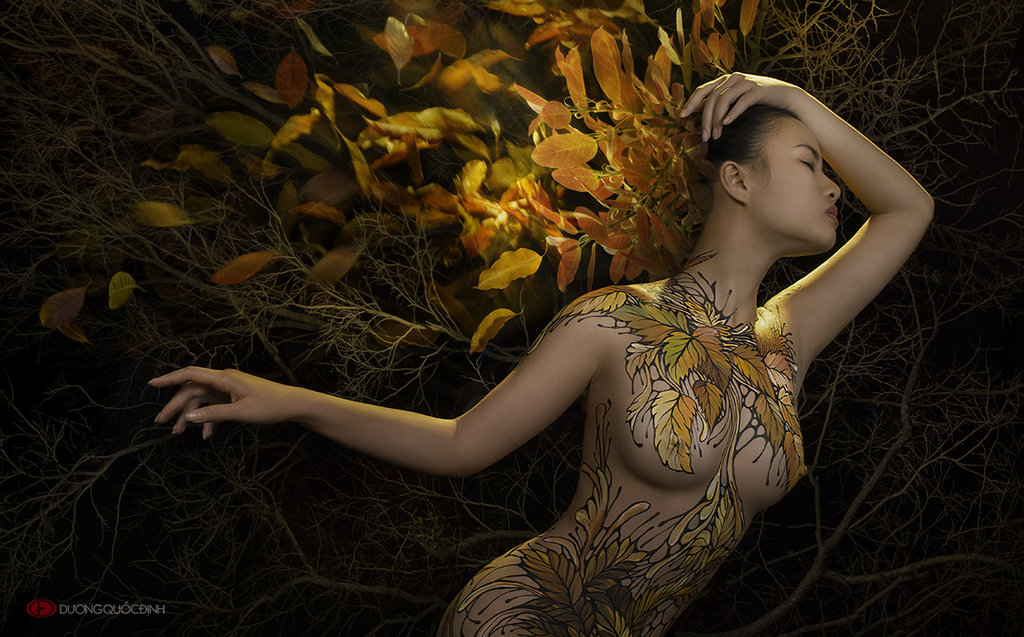 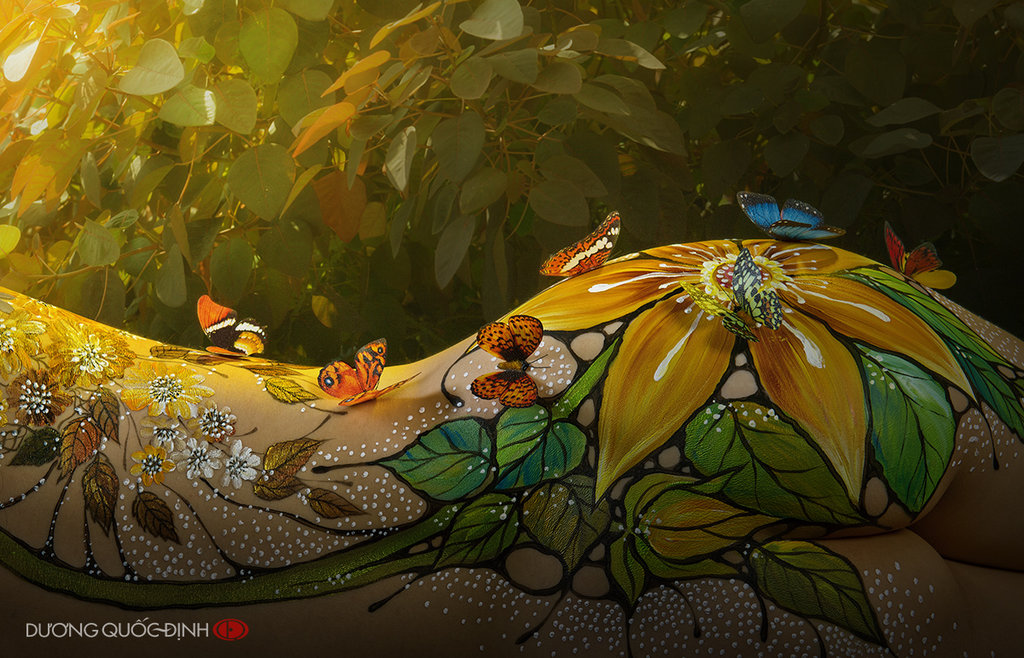 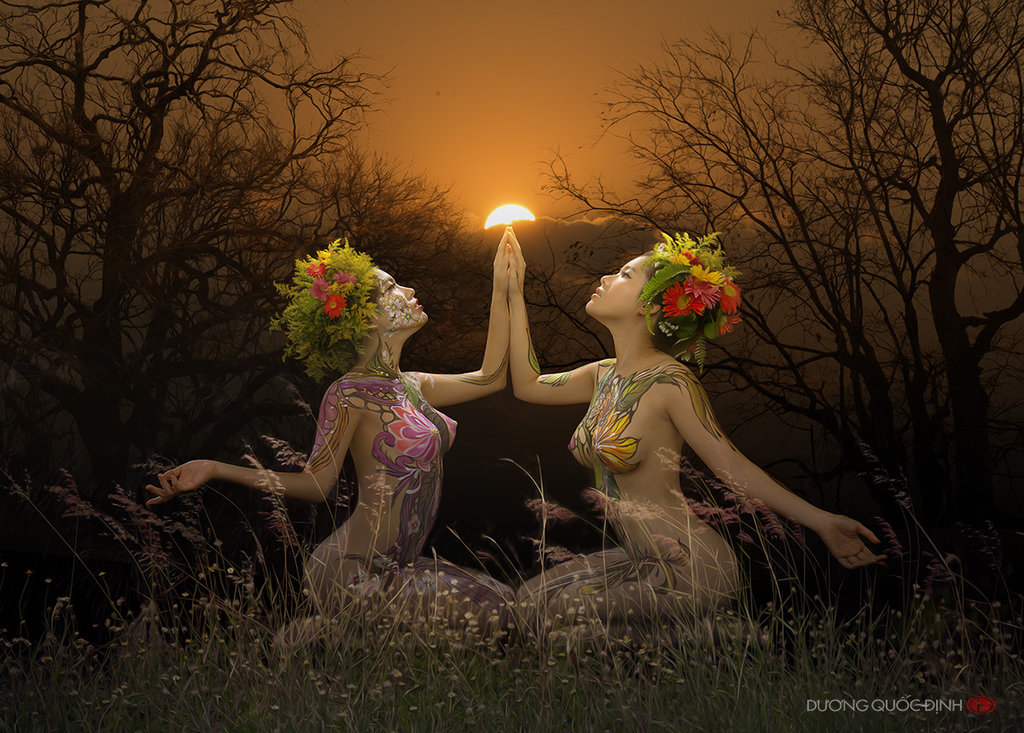 Dinh’s international acclaim quickly brought him lucrative work at home.
His first contract to shoot a fashion collection ended up bringing him US$3,000 in 2008.
When receiving the money, his wife asked him, “Were they mistaken?”
“It’s the fruit of my labor. Thank you very much for your sympathy and encouraging me during the past years, though, we faced many difficulties,” Dinh told his wife.
Soon Dinh was creating custom albums of family portraits, wedding photos and nude art photos for $3,000 each.
The money finally brought Dinh and his family a comfortable life.
Dinh said he’s happy to see lots of people enjoy his work and many have asked to buy custom prints.
Dinh only sells images of his nude paintings to those who really love and understand the work.
He insists on autographing each print.
All of this provided Dinh great satisfaction. But the most important thing of all, was his father’s approval.
“Every time I received a prize he would go around and tell all the neighbors,” Dinh said.
When his father died a few years ago Dinh lost his will to work.
He’d come to feel his success had lost all meaning — as he could no longer share it with his father.
“The love of my wife and children helped me overcome that deep sadness,” he said. 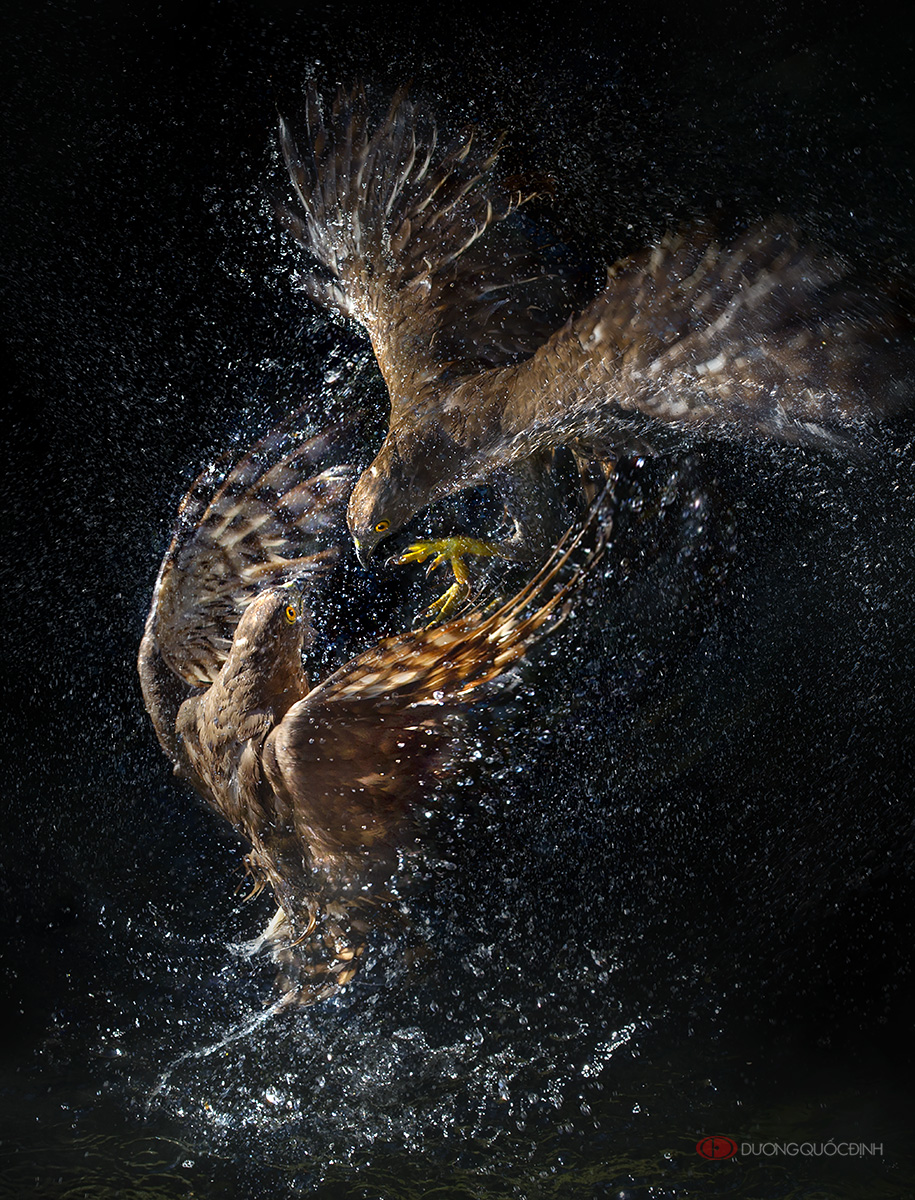 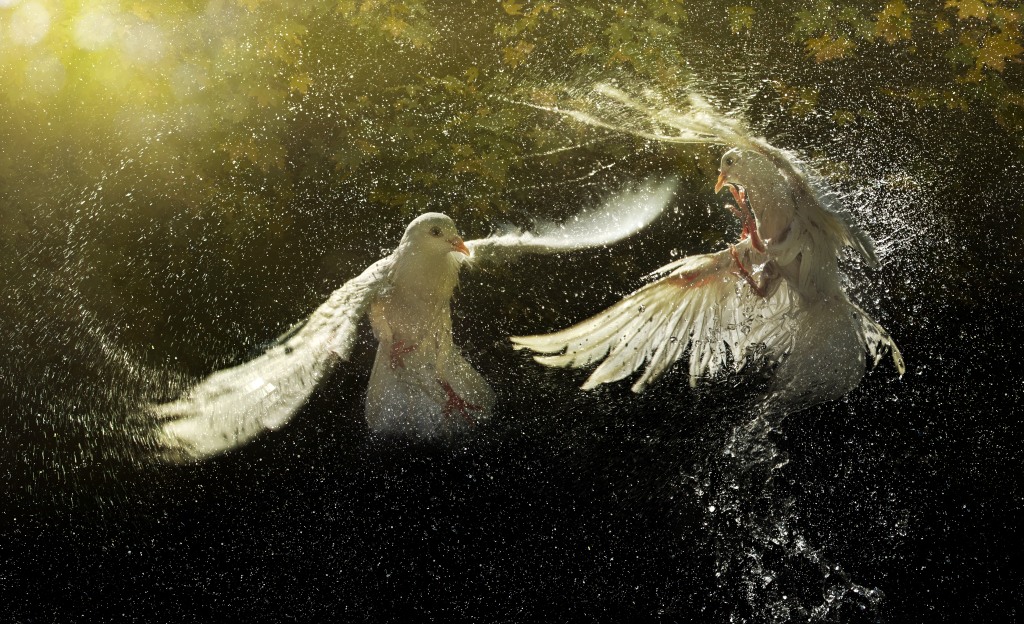 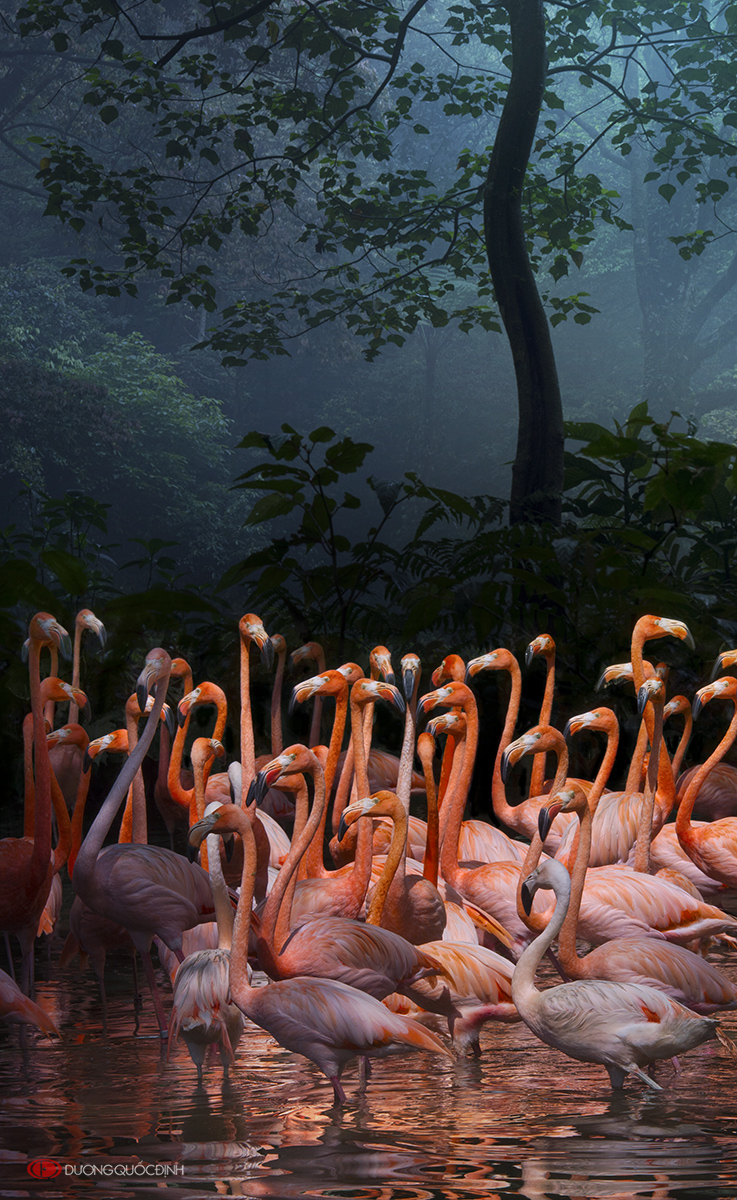 Dinh’s first nude model was his wife.
The images of her body still line the walls of the studio in their home — a practice that shocked some visitors, who advised him to take them down.
“If I have a beautiful wife, why shouldn’t I display her photos?”
Dinh said that since he began shooting in 2004, he has selected only nine volunteers to serve as nude models. None had ever done the work before. Every one is a volunteer.
It usually takes Dinh two to three months to persuade each woman to relax and model properly.
Both the photographer and the model secure the copyright to the images; and she is eligible to keep a collection of the original images.
To prevent any jealousy or suspicion, Dinh always tries to have his wife to take part in each photo shoot.
Dinh has been working with his models for nearly a decade and says they’ve all become close friends of his family.
Dinh still remembers the days he met and talked with his first model, a young woman who then worked as a hair model at a salon near his house.
The first time he saw her, he said, he noted her sad eyes
After making her acquaintance, Dinh and his wife gradually grew close to the woman, who came to treat them like relatives.
A few months later, she agreed to pose for Dinh.
One of the images he took of her, entitled “Life Material,” won a PSA Gold Medal at a contest in India before taking high prizes at four other international competitions.
One of his newest models, 25-year-old Thuy Quynh, originally came to the studio with her mother to pose for a series of normal portraits.
When they arrived at the studio, Quynh’s mother changed her mind and decided to let her daughter take a collection of nude photos to keep for herself.
Quynh agreed to become a Dinh’s model after several talks with him in the following months.
Four years later, Quynh continues to serve as his canvas.
“I won’t ever pose nude unless I completely trust the photographer. I trust Dinh to take photographs or draw on my body as I’m sure that he has no lust for me or his other models,” Quynh told Thanh Nien News, adding that she has been featured in more than 200 of Dinh’s photographs.
“I decided to get involved in nude photography not to earn money or fame. It’s just my way of sharing in Dinh’s passion,” Quynh said. 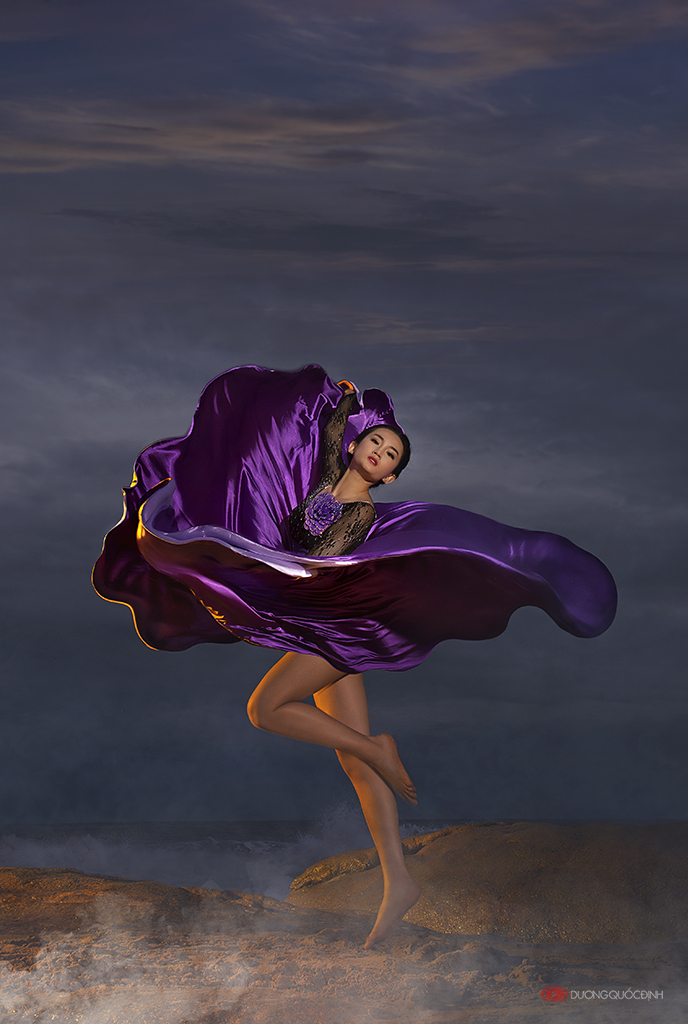 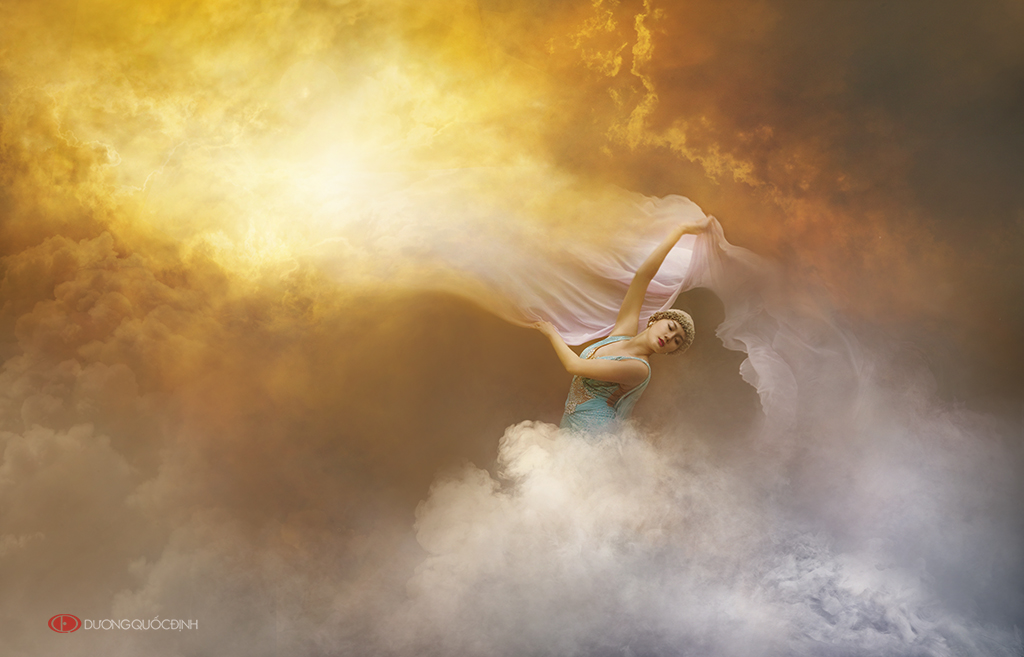 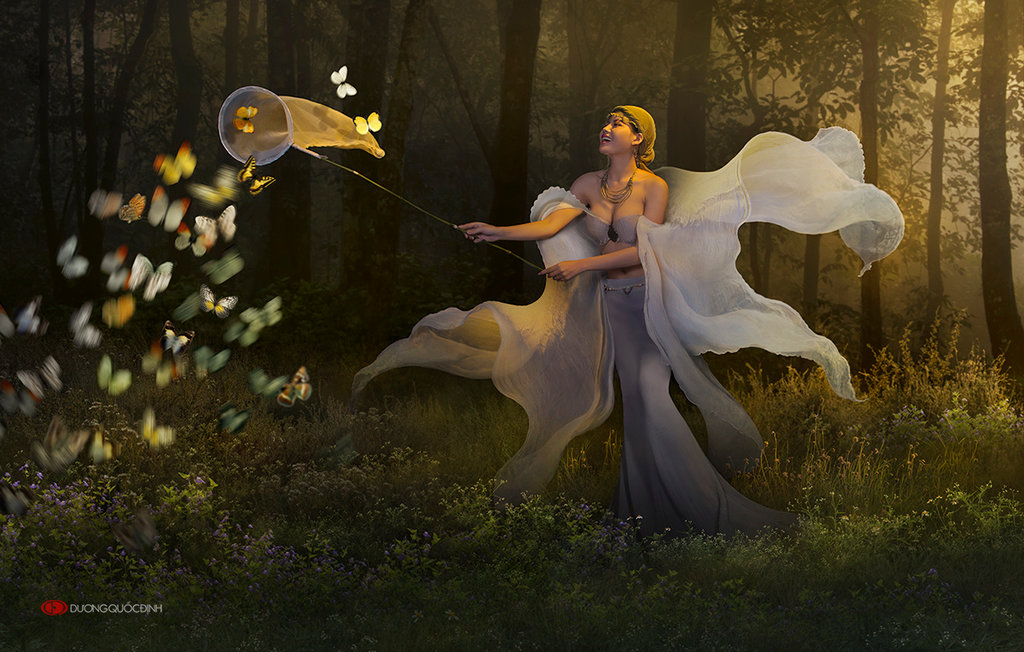 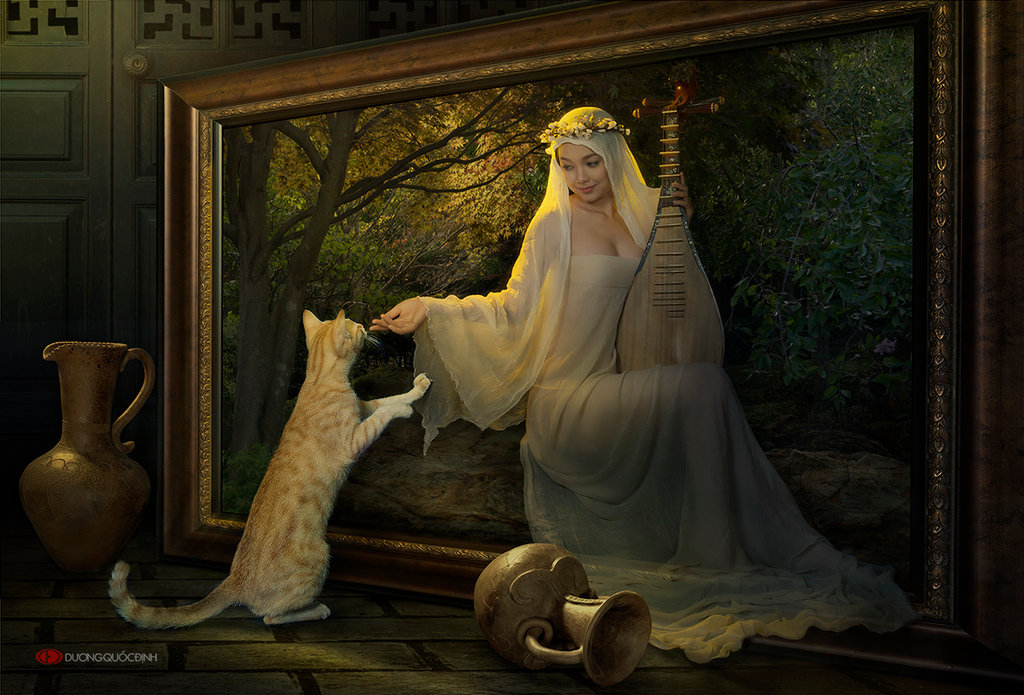 Dinh says the line between nudity and pornography remains blurry for many in Vietnam.
“If a photographer isn’t qualified enough and he doesn’t have a proper concept of beauty, he can easily cross that line!,” he said.
Dinh, who became a practicing Buddhist and vegan ten years ago, says he has avoided scandal by strictly adhering to his religious precepts — which prohibits carnal thoughts about someone other than your wife or lover.
Quynh, who just married, said her husband had doubts about Dinh, but after talking with the photographer, he changed his mind and has assisted in several of Dinh’s shoots.
“The most important thing to me is my husband understands me and what I’ve done,” she said.
Quynh also said that her husband’s family does not yet known that she’s worked as Dinh’s model. “Whenever they learn about it, I will explain my work, using my sincerity to help them understand.”

“I want to spend the rest of my life helping young students,” he said. “It’s my way of expressing my thanks to those who helped me before.”
For the past three years, Dinh has taught more than 300 needy students without accepting any payment.
In addition to teaching, Dinh is preparing to return to his art, which he said he would continue to focus on depicting the beauty of women through different forms like painting, relief work and sculpture.
“For the past 38 years I’ve been trying to bring an idea from my mind into the world. I’ll keep striving towards that goal,” he said.
“Art is endless. Once you’ve reached your goal, you’ll find nothing waiting for you but the abyss.”