Kris Kuksi is an American artist in the genre of Fantastic Realism.
Specializing in creating complex artistic installations, his work has been described as “a study in timelessness and intricacies, reminiscent of lost civilizations, deities and ruins – perfectly preserved.
Born March 2nd 1973 in Springfield Missouri and growing up in neighboring Kansas, Kris spent his youth in rural seclusion and isolation along with a blue-collar working mother, two older brothers and an absent father.
Open country, sparse trees, and later alcoholic stepfathers, perhaps paved the way for an individual saturated in imagination and introversion.
His fascination with the unusual lent to his macabre art later in life.

The grotesque to him as it seemed, was beauty.
In adulthood his art blossomed as a breakthrough to personal freedom from the negative environments experienced in youth.
He soon discovered his distaste for the typical and popular culture of American life and felt that he had always belonged to the ‘Old World’.
In personal reflection, he feels that much of mankind in the World today is elastic and fragile being driven primarily by greed and materialism.
He hopes that through his art expose his audience to the awareness of the fallacies of Man.
His work has received several awards and prizes and has been featured in over 100 exhibitions worldwide as well as featured in international art magazines and fictional book covers. 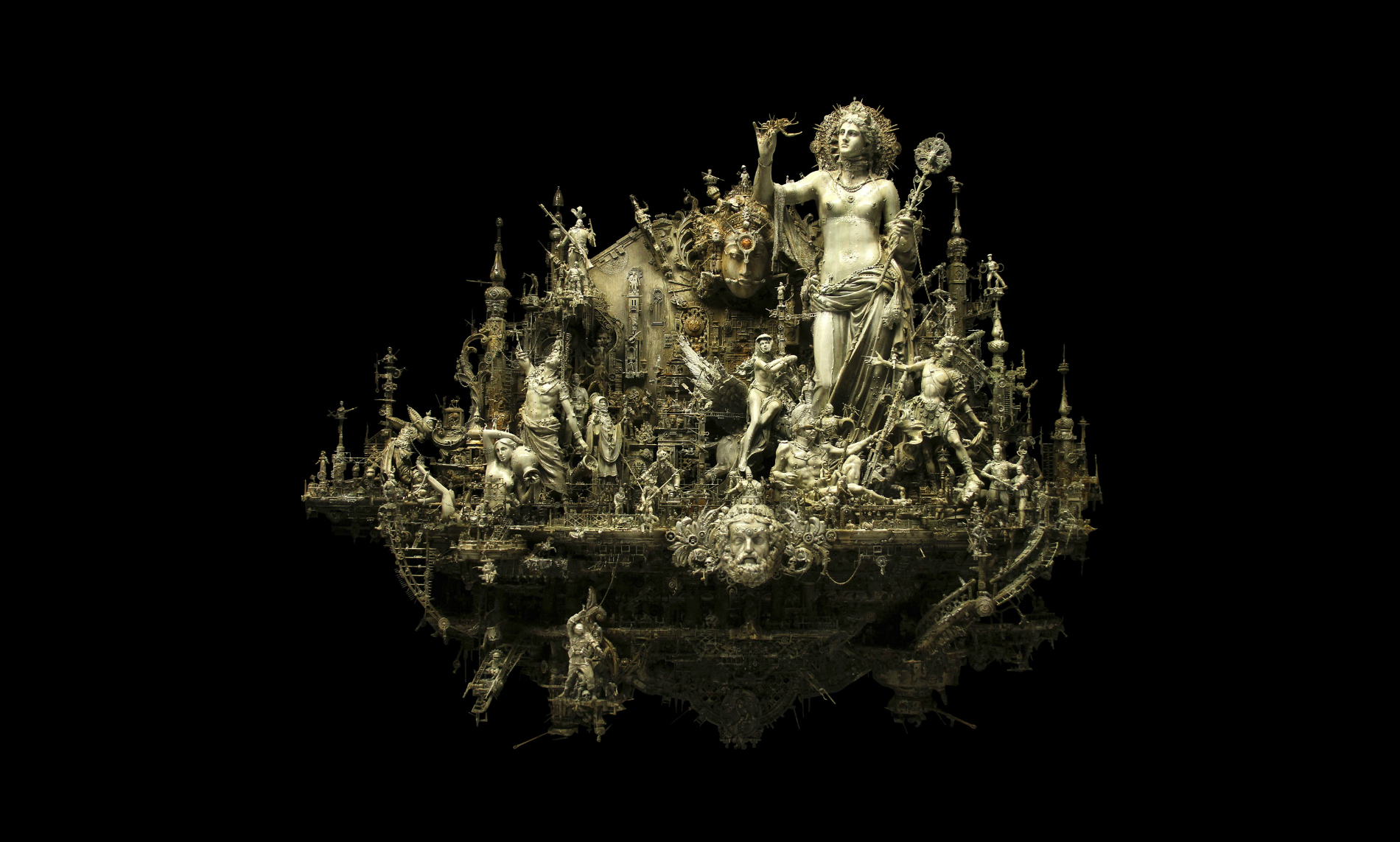 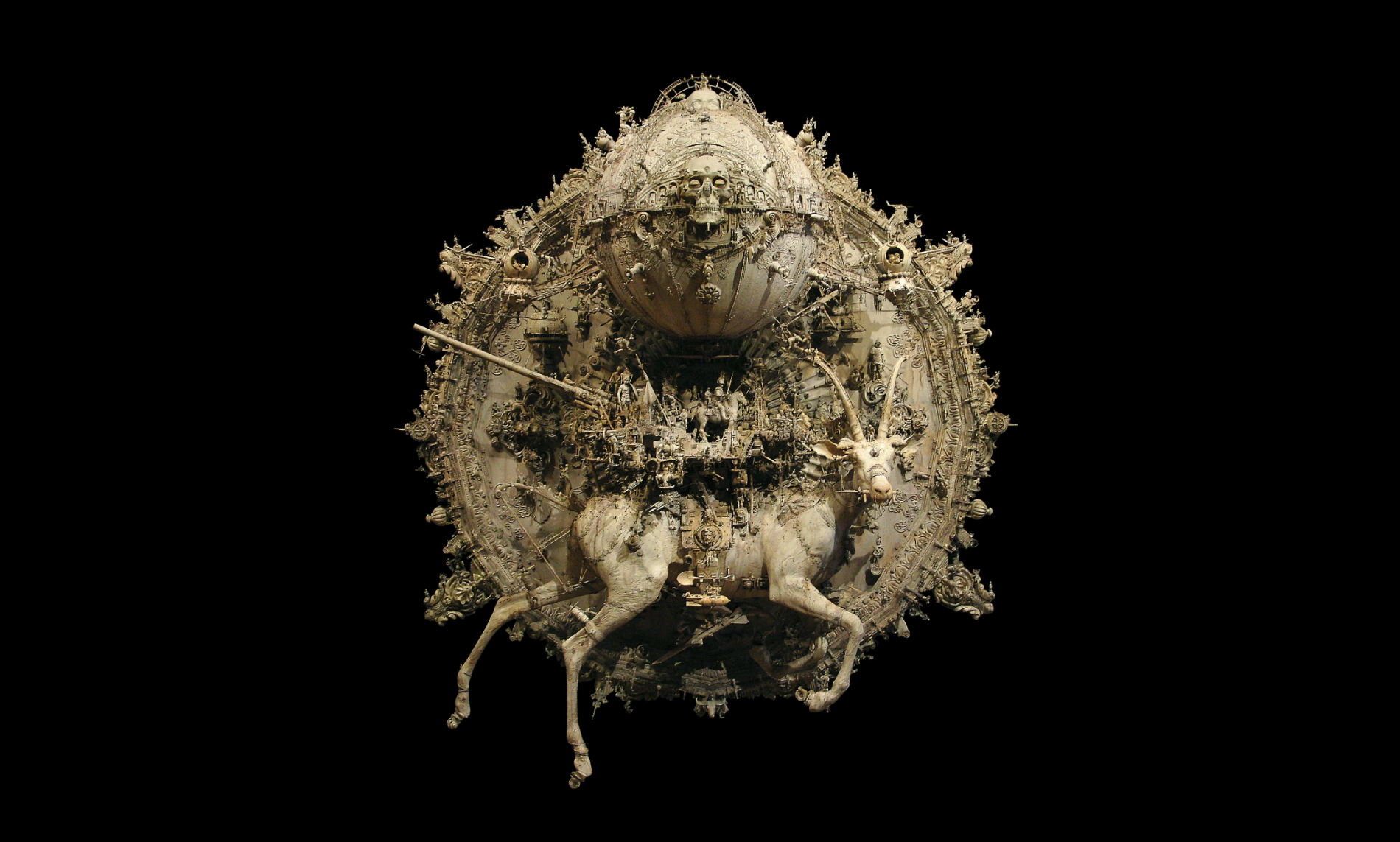 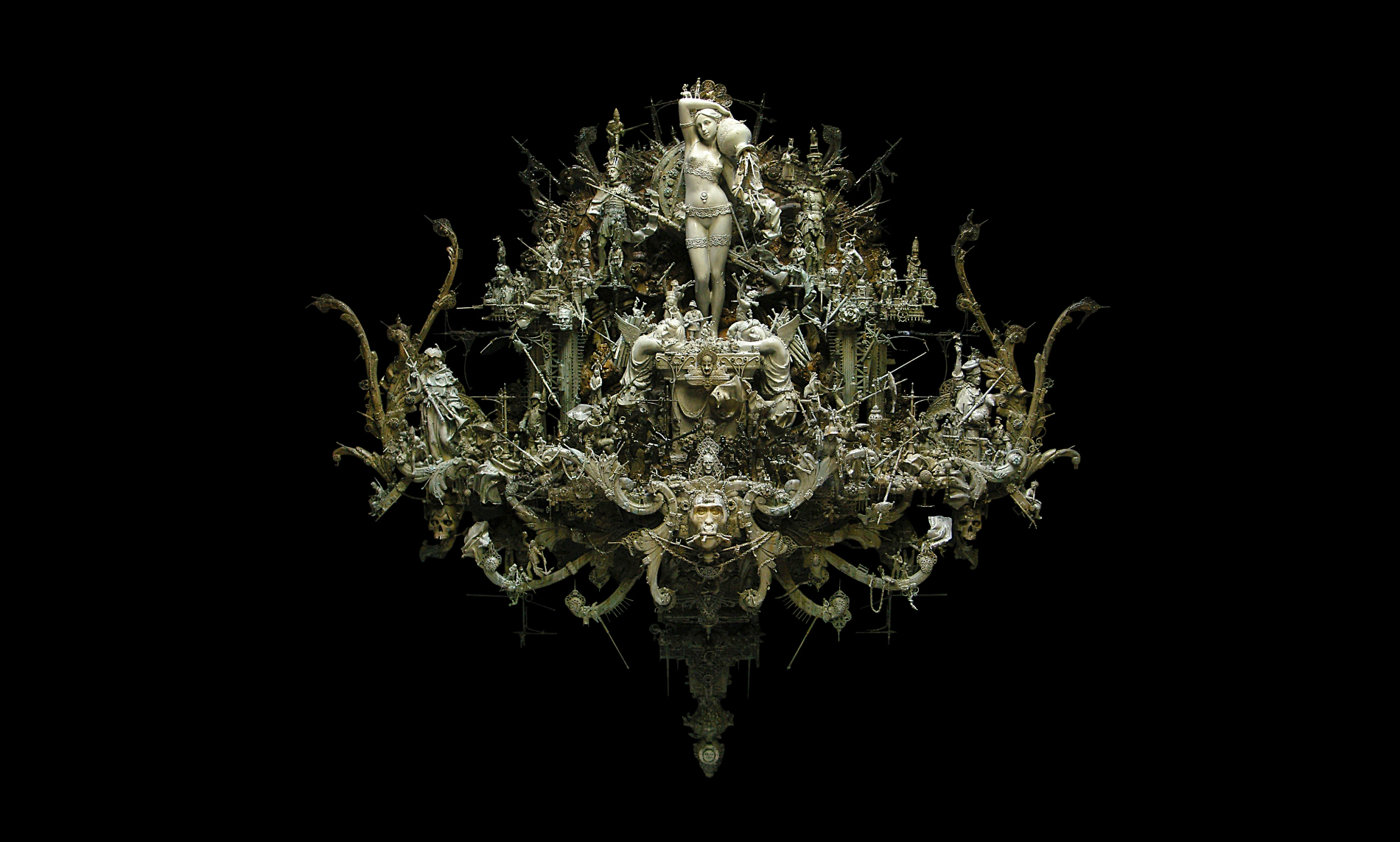 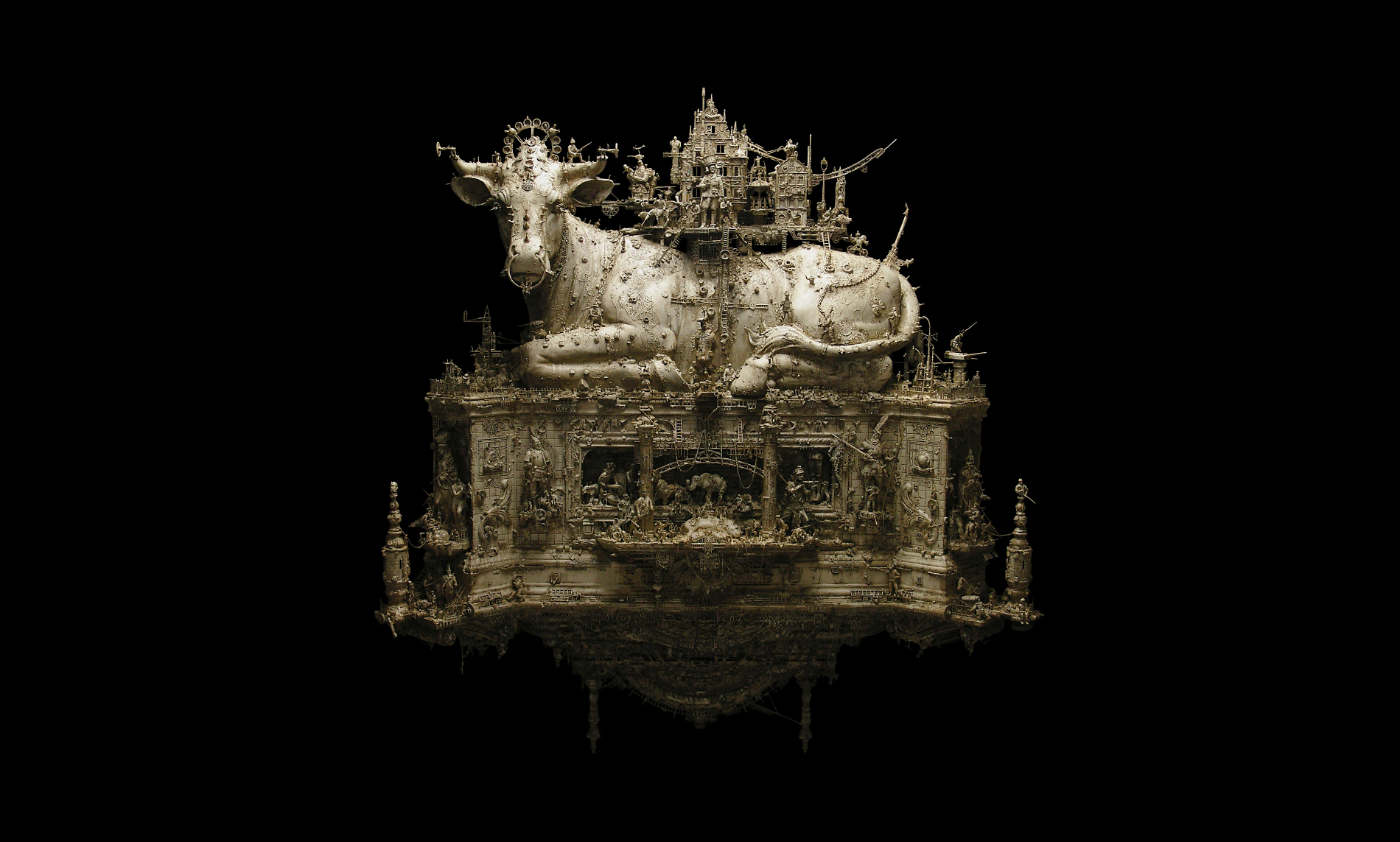 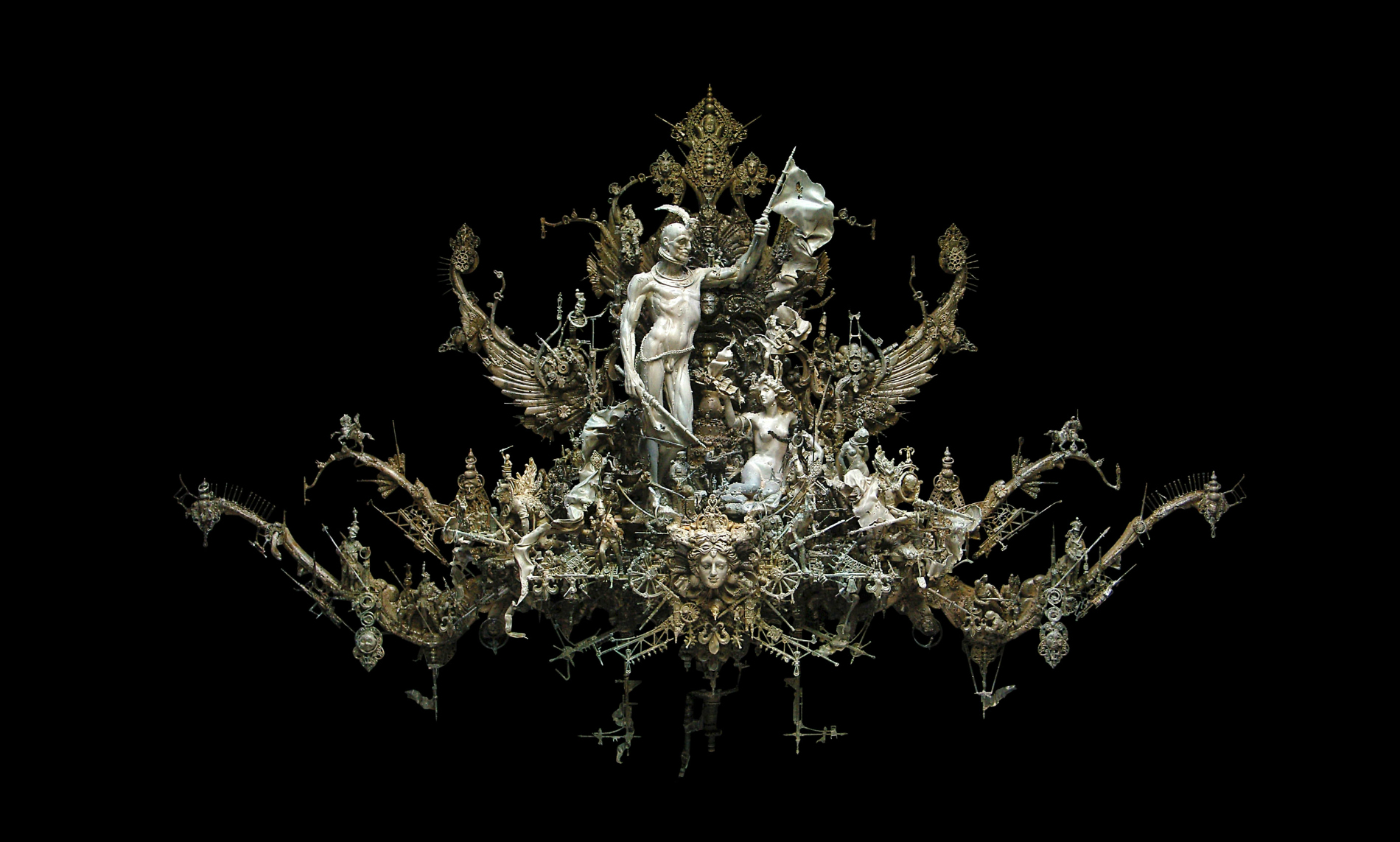 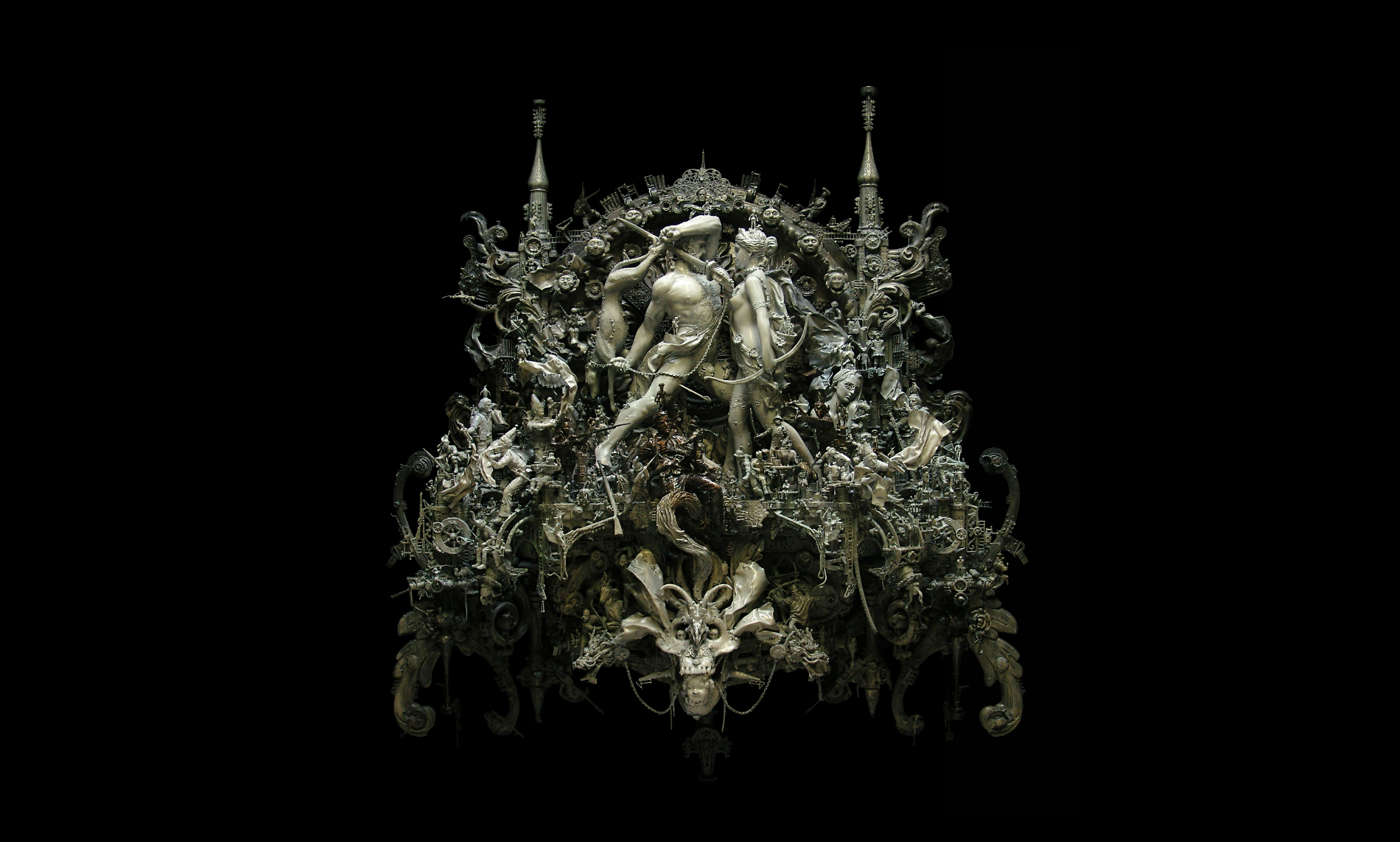 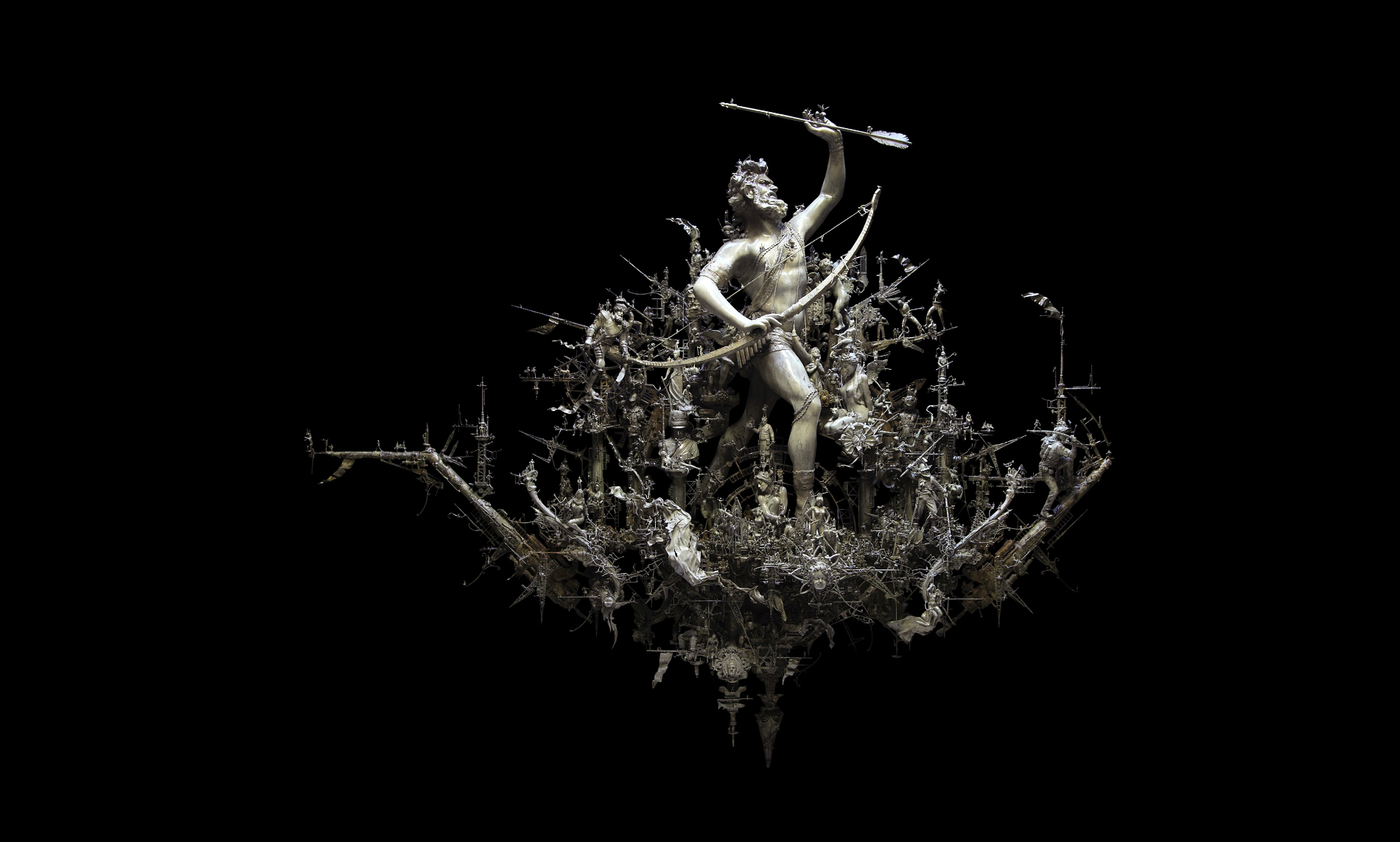 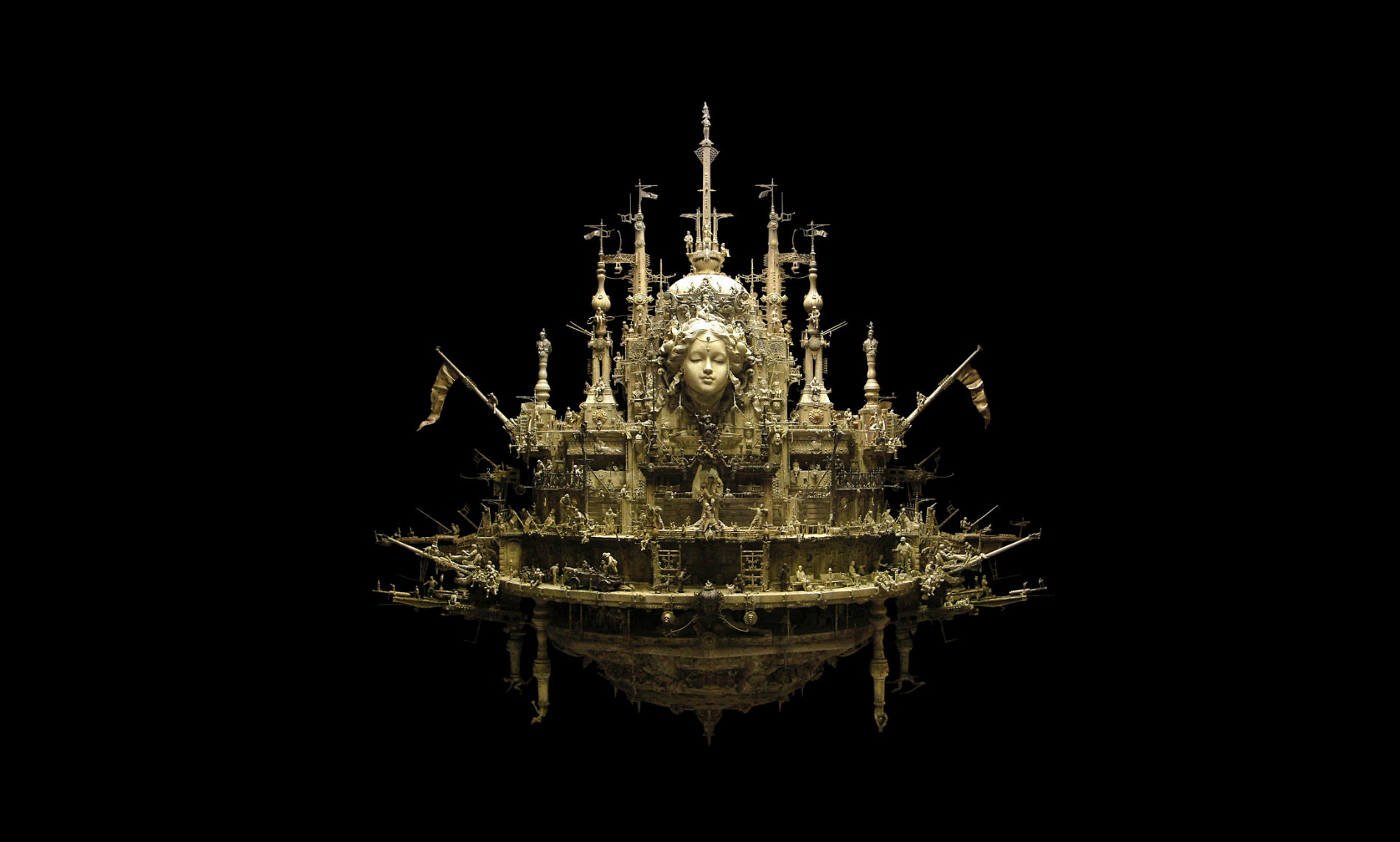 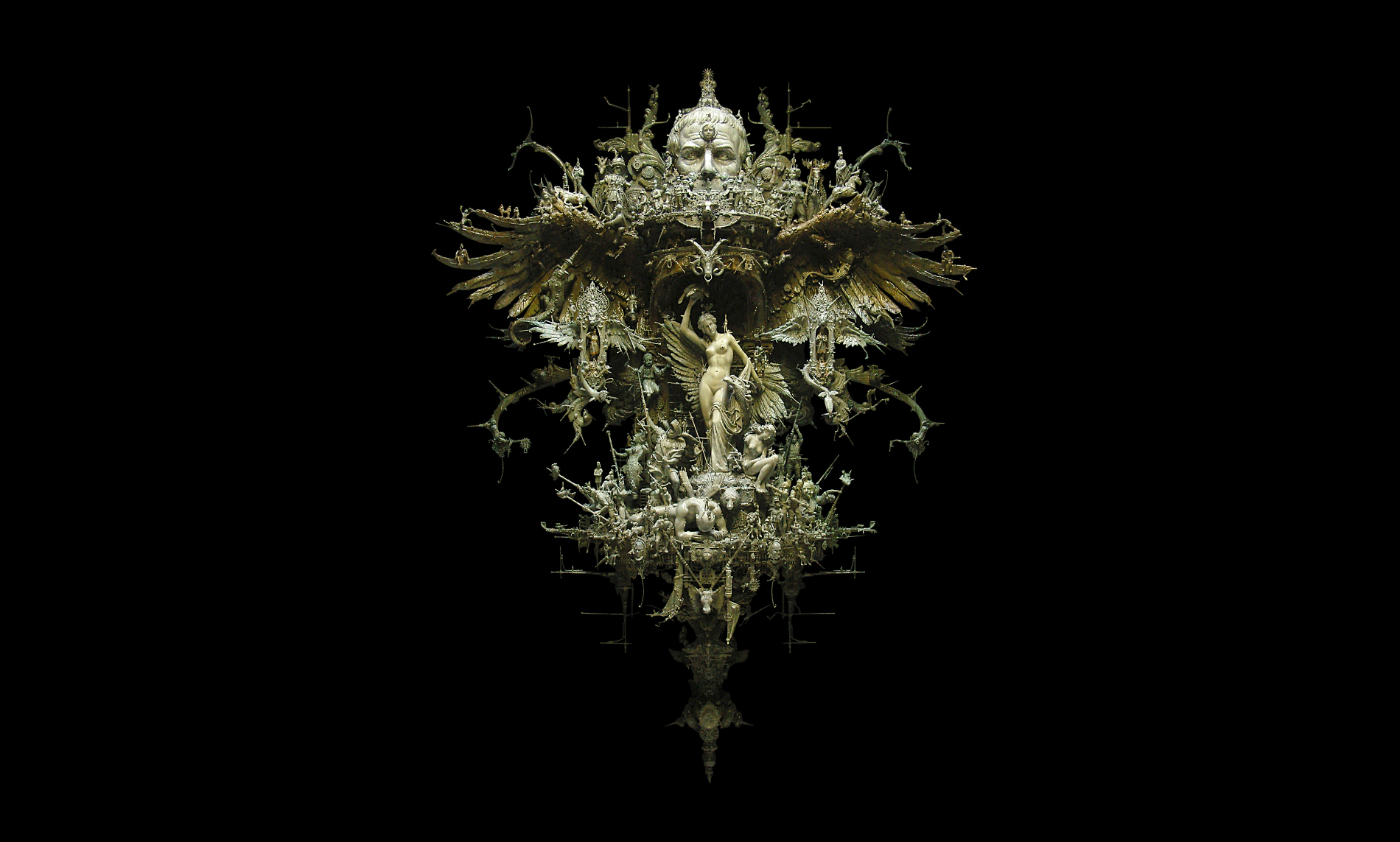 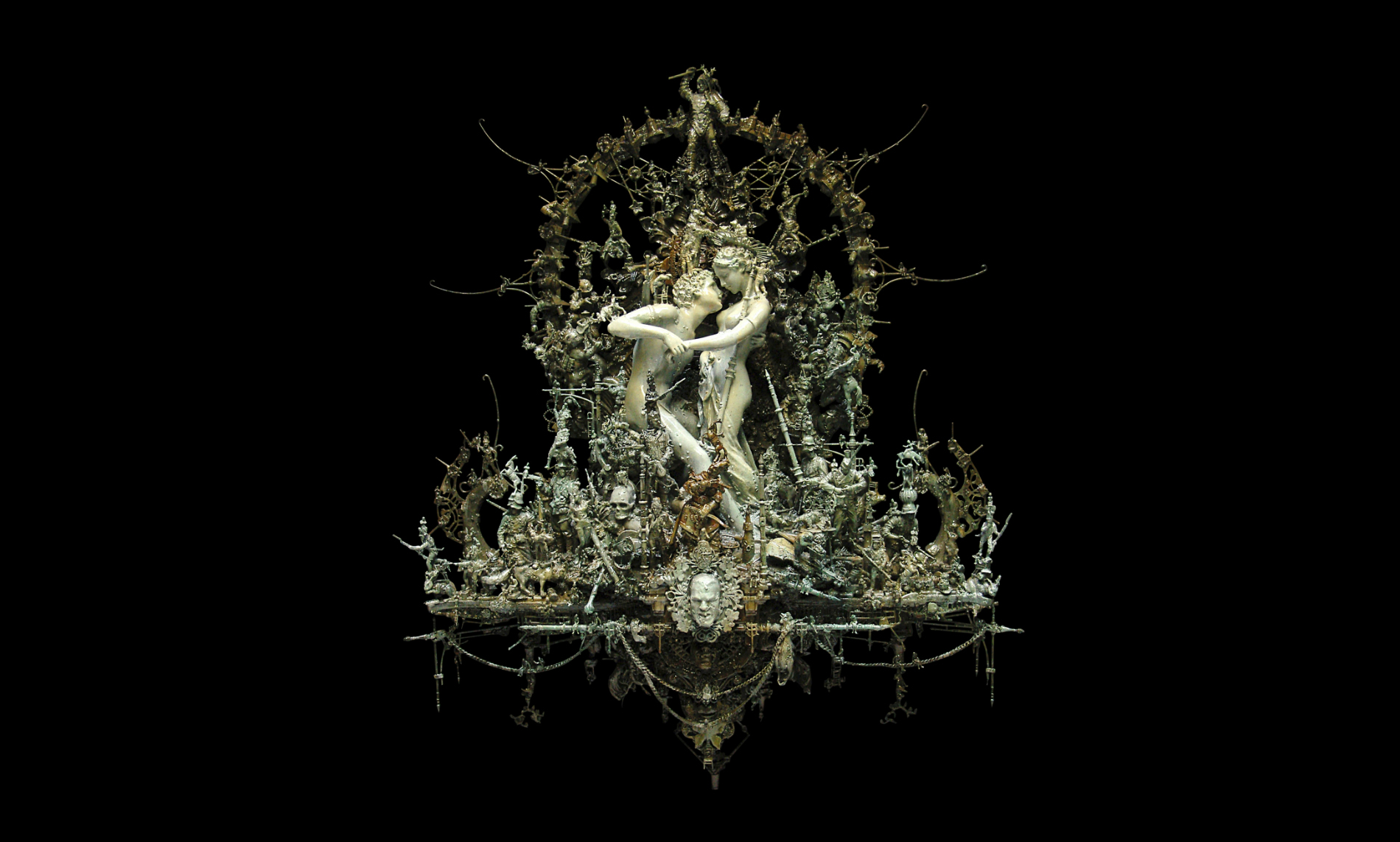 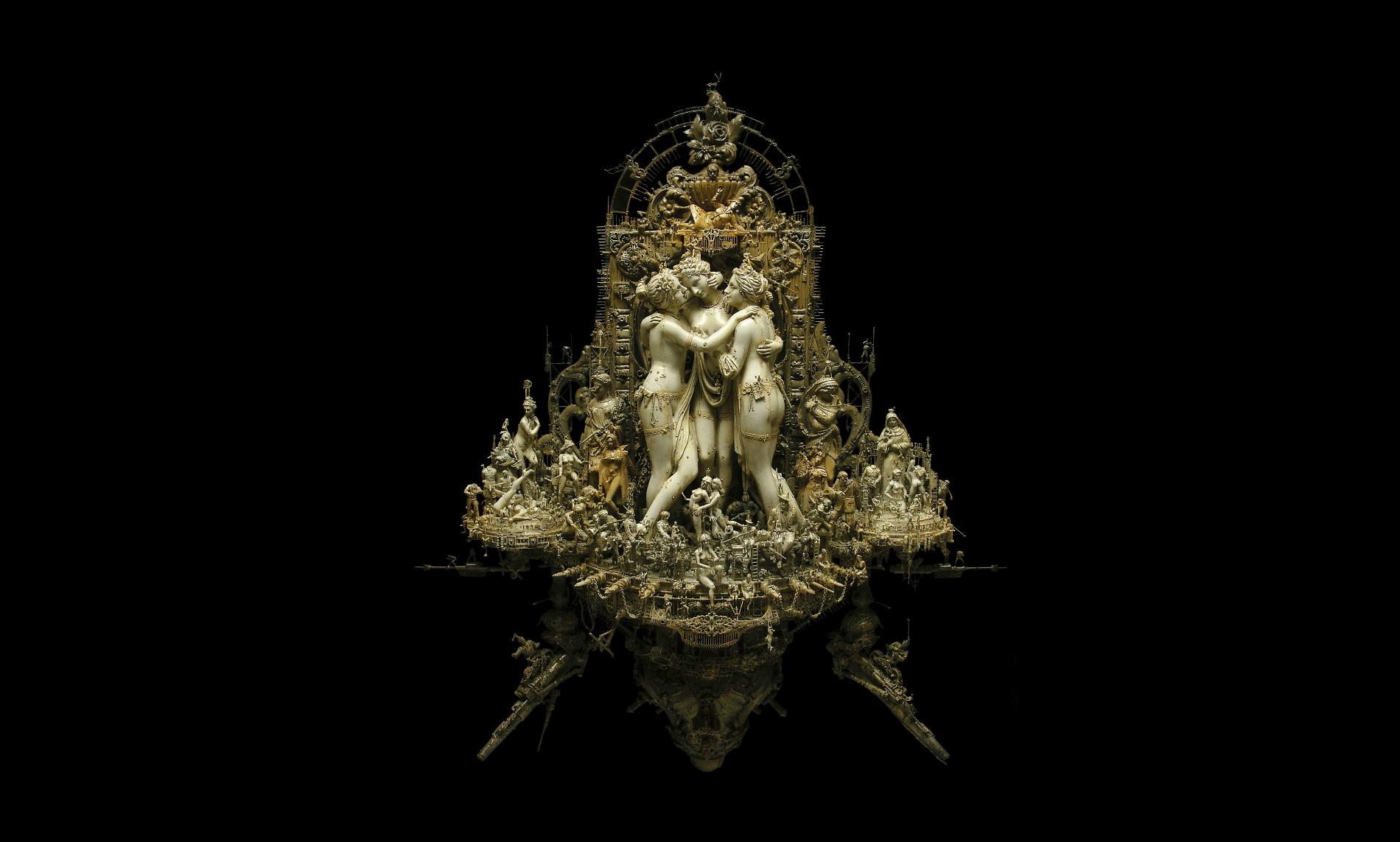 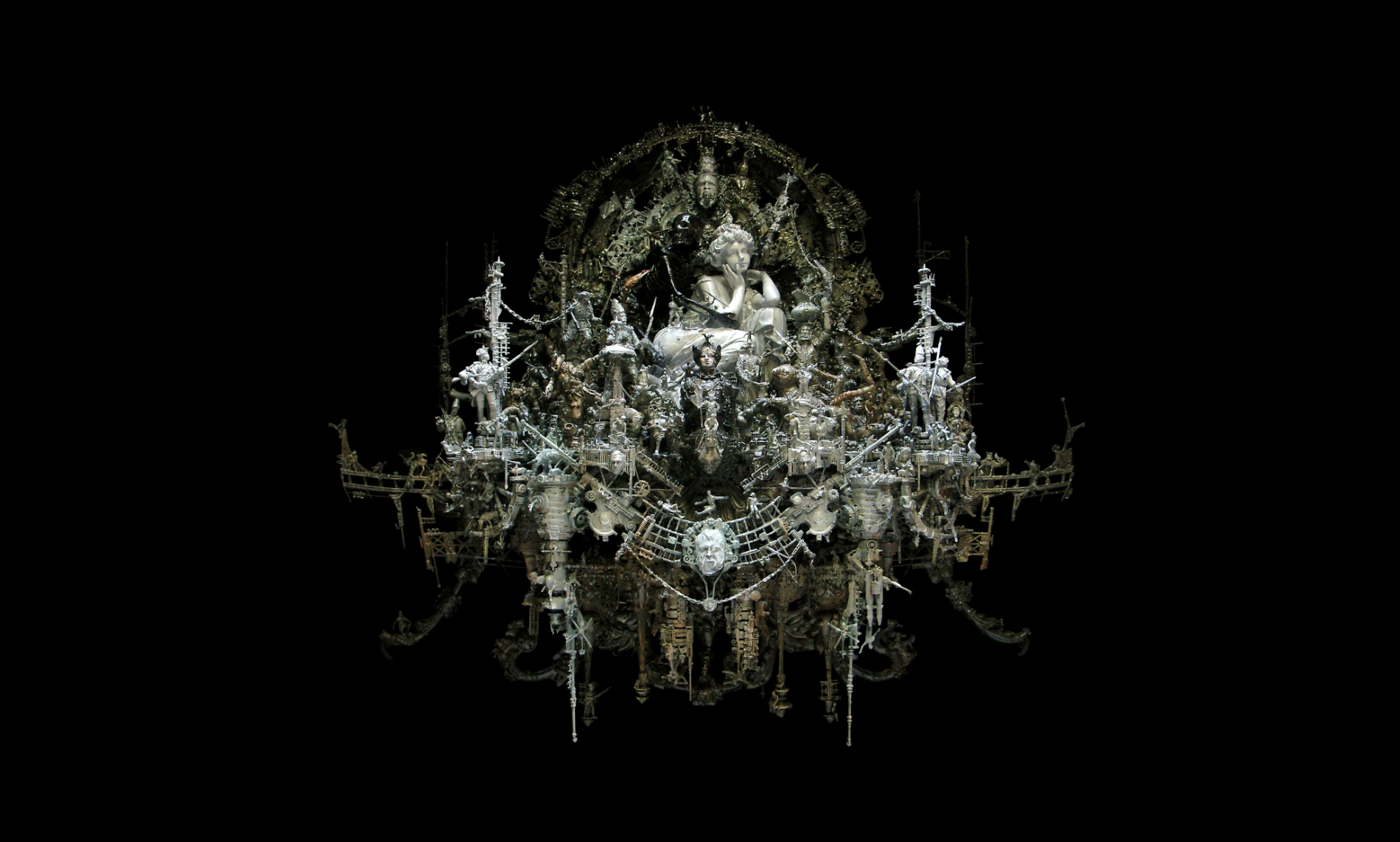 I get inspired by the industrial world, all the rigidity of machinery, the network of pipes, wires, refineries, etc. Then I join that with an opposite of flowing graceful, harmonious, and pleasing design of the Baroque and Rococo. And of course I add a bit weirdness and the macabre. It’s all about how I see the evolution of what man makes his created environment look like.
I had such a major emphasis in painting and drawing earlier in my career, and had a great time with it but I always felt something was missing.
I knew deep inside I was a builder, and so my 3-d work is the expansion into that realm. I still enjoy painting and doing figurative work, but those moments are reserved for special times. Yet sculptural works are wonderfully intricate constructions of pop culture effluvia like plastic model kits, injection molded toys, dolls, plastic skulls, knick-knack figurines, miniature fencing, toy animals, mechanical parts and ornate frames or furniture parts; assembled into grotesque tableaux that look a bit like an explosion in Hieronymus Bosch’s attic.
My art speaks of a timelessness; potentiality and motion attempting to reach on forever, and yet pessimistically delayed; forced into the stillness of death and eternal sleep. I treat morbidity with a sympathetic touch and symbolize the paradox of the death of the individual by objective personification of death. There is a fear of this consciousness because it drops in upon us without mercy, and yet there is a need to appeal to it in order to provide a sense of security, however deluded that sense may be.

My art warns us that this appeal is irrelevant, and that we should be slow to create a need for it.
The themes I use also teach us that although death may pursue us arbitrarily, we should never neglect to mourn the tremendous loss of individual potential.
In personal reflection, I feel that in the world today much of mankind is oftentimes a frivolous and fragile being driven primarily by greed and materialism. I hope that my art exposes the fallacies of Man, unveiling a new level of awareness to the viewer. My works have received several awards and prizes and has been featured in over 100 exhibitions in galleries and museums worldwide including the Smithsonian’s National Portrait Gallery.
My art can also be seen in a number of international art magazines, book covers and theatrical posters. My art is featured in both public and private collections in the United States, Europe, and Australia that include individuals such as Mark Parker (Nike CEO), Kay Alden (three time Emmy award winning writer for Young and the Restless & Bold and the Beautiful), Fred Durst (musician, and film director), and Chris Weitz (movie director The Golden Compass & American Pie).